In Liverpool to promote his new novel Railsea, this was Miéville's third visit in three years. Full disclosure: I organised this event in my capacity as a Waterstones Bookseller. 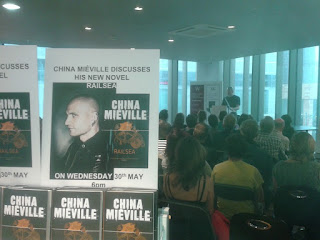 Anyone who has seen China Miéville speak knows he is a thoughtful, intelligent and eloquent speaker and so it was no real shame when he only read from Railsea for five minutes and instead spent nearly 50 minutes answering questions from the audience. I can't hope to replicate that entire session here but from my notes I thought it might be interesting to give an insight into a selection of the topics he covered. Its also worth noting that most of this is constructed from notes and memory, not recording, and so I wouldn't hold China Miéville to any of the comments reported here (although I've tried to be as fair and accurate as I can be).

Obviously, given that this was primarily a publicity trip a reasonable number of questions revolved around the new novel, Railsea. He said that his publisher is marketing it as a novel for all ages, which is just a cheeky way of saying "everyone should buy it", and that whilst the idea of a reading age for a piece of fiction, and the entire concept of teen/adult fiction is something of a grey area, he thinks he was writing this for a younger version of himself as the kind of book he would have liked to read as a young teen. When pushed on precisely how young he commented that his other "young adult" title Un Lun Dun was written for the version of himself who was reading Alice in Wonderland and that Railsea was probably for a slightly older China.

Reminiscing on that younger China he reflected on when precisely it was that he realised he was reading genre. He pointed out that all young kids are reading stories about monsters and magic and the question he asks is not "how did you get into genre?" but "how did you get out of it?" That said, he admitted that the version of himself who he had in mind when writing Railsea was probably genre-aware and actively seeking out work classified as fantasy. Ursula Le Guin, in particular the Earthsea books (!), Joan Aiken and Michael De Larrabeiti came in for particular praise as authors who he adored at this particular age. 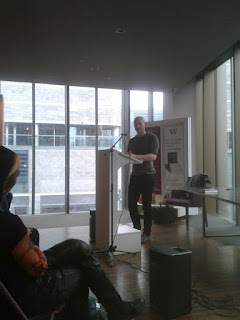 Of Railsea itself he described it as an idiotic joke homage to Moby Dick which he's been mulling over for five or six years, with a 'search for the giant yellow mole' unsubtlely replacing Ahab's white whale. He explained how he likes to take a silly idea and be very straight with it, to almost 'alchemically de-silly it.' As for why he wanted to riff off Moby Dick, its partly because its such an iconic and iconoclaustic text and partly because since almost the moment he was first published people have been making Miéville-Melville jokes and that this was almost an attempt to lance that particular boil face on.

Miéville was also drawn on his new foray into comics with his authoring of DC's Dial H. He said it was a title he had always loved and that over the years in various conversations with DC he'd always finish by telling them that they should let him revive Dial H until finally, when DC rebooted their entire universe recently, they finally turned around and said "okay". Of all the conversations with DC, Marvel, and others, Dial H was 'the one comics project that I've been desperately trying to get off the ground for six years', and finally the stars aligned.

A brave member of the audience also broached the topic of the Christopher Priest "rant" over this year's Arthur C. Clarke award. Miéville was very philosophical about the whole thing, as you'd expect, pointing out that vigorous debate over a short list is a good thing and that we, as consumers of geek culture *should* be being more critical not just over awards but over everything (he confessed he's as guilty as anyone of doing this but we need to stop going to see a film just because it has a monster in it!), besides, as he said, if anyone has earned the right to be pissy and kick up a fuss its Christopher Priest. The one piece of the article he did object to however, was the accusation that Embassytown was lazily written. Miéville said that he's since spoken to Chris Priest and told him that he'd rather be accused of being incompetent than indolent: 'I make mistakes all the time... but I work very hard.' He also admitted that of course its hard to hear criticism such as that from a figure you've long admired. That said, when asked if he now had an imaginary Christopher Priest on his shoulder watching over his newer writing he remarked that he's always had a stylistic policeman, or more appropriately a commissar, but for him its an imaginary M. John Harrison; after all, he repeated, it matters that we are critical about our stuff. 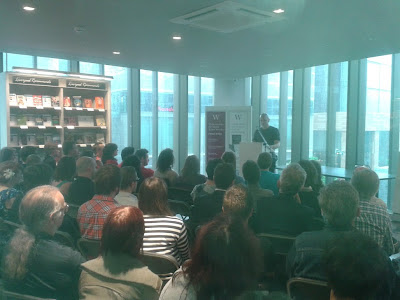 Inevitably the topic of the Bas-Lag books and Perdido Street Station in particular was raised. As he has done on other occassions I've seen him speak, Miéville refused to rule out ever returning to Bas-Lag, but he did say that the manner in which Perdido in particular was written was very much a way of working he could never return to. He said he was still immensely proud of that work but that it's a young persons book and he'd just turned 40. One interesting insight into Perdido that we gained was that it was originally going to be a story about photography being invented in a fantasy world and that he'd gotten reasonably far along with it until he found out he was ripping off a story by Brian Aldiss called The Malacia Tapestry, which is about photography being invented in a fantasy world, and which he's read years ago as a child and since forgotten about.

One of the most interesting questions for me was from a lady who asked about the lyrical nature of Miéville's work. He responded that he thinks "sonically" and will often play a piece of music on repeat whilst trying to perfect a certain scene so that eventually he comes to associate that music with that scene. He even compared the way he works to a young child making space ship noises as he draws a space battle. If his work is lyrical he suggests its because of a love of Anglo-Saxon poetry, a lot of which certainly made its way into Embassytown. He said that a few years ago he'd had his ears tested through a fear that he was losing his hearing, as it turned out his hearing is very good but he struggles to filter out sound meaning that he is acutely aware of background noise and struggles to focus on one person in a noisy room for example. For this reason he said he was unable to watch Doctor Who as he finds the over the top 'cheap' orchestra too distracting.

He was asked who he thinks should direct one of his books to which Miéville responded that he's not a fan of the idea that 'if a book is very good, and eats its greens, it might grow up to become a film.' That said he's favour someone like Guillermo Del Toro, or Nicolas Winding Refn whose work he's particular impressed by.

Overall it was an interesting and fun event, although my big regret remains not asking him if he is aware of CouldTheyBeatUpChinaMieville.wordpress.com and if so does he agree with their outcomes. Ah well... there's always next time.
Posted by Glyn at 00:18