Last weekend I was down in Hay-on-Wye working as a steward at the world famous literature and the arts festival, now in its 25th year. It has long been an ambition of mine to be in Hay when the festival is on and the opportunity to steward (representing Waterstones in this instance) was too good to pass up, especially as I didn't have to pay for my travel or my camping.

I wanted to do a detailed diary-style blog post for each of the three days that I was at the festival but the fact I was far too busy to make any sort of notes, coupled with the fact that since I got back I've been too busy to write this blog post, means that I'm working from memory and the few grainy photos I managed to snap on my phone and so I thought it wisest to restrict myself to a single post.

I arrived in Hay-on-Wye with a fellow Waterstones affiliated steward after a 50 minute bus trip from Hereford, it was my first visit to the town itself, let alone to the festival, and I delighted in the location and layout of the place, every other shop was a bookshop and the streets seemed to resemble more a squiggle than the straight line of a single high street I've so long ago become accustomed, and bored, with. Perhaps it was this euphoria that sent us in completely the wrong direction, back over the bridge, over the river Wye, to the wrong campsite before trooping valiently to the otherside of the small town to our designated lodgings located, confusingly enough, in England. For you see, Hay-on-Wye is such a border town that our campsite managed to be still part of Hay but actually over the border, as was the Co-Op accross the road which meant we could at least get carrier bags for free...

All the Waterstones stewards eventually converged on the festival site, on the opposite side of the town to our campsite (but still only a 15 minutes walk - it's not a big place), and I instantly fell in love with the occasion. The Hay festival site is a series of temporary event venues (to call them tents is like calling a cathedral a church, not wrong but inaccurate) ranging from the small seminar room sized Hay-on-Earth to the massive 1600 capacity Barclay's Pavilion connected by a warren of white cellophane canopied walkways along which the book lovers scurry from event to bookshop to cafe. After some brief orientation we were left to our own devices and told to report back later for our first piece of stewarding duty: helping to staff the pavilion for a Tim Minchin gig that evening.

From my perspective at least the gig went off without a hitch and so began my time stewarding Hay. Given that we were only going to be on site for Saturday and Sunday I aimed to see and do as much as I could in that time, to get as full a taste of the festival as I could within the constraints of my responsibilities as a steward and within the time limit allocated to me by the limited time I could be away from Liverpool. On the Saturday, feeling wide awake despite the heavy snorer five feet from my head in the next tent, I attended numerous events from historical fiction author Philippa Gregory talking about her new book The Changeling, to poet Simon Armitage talking about walking the Pennine Way the wrong way and without any money (detailed in Walking Home). Some of the event suprised me, I had no idea I would find John Thompson's talk "Merchants of Culture" so interesting, but then given that it revolved around the book industry and the future of publishing I suppose I was predisposed to be fascinated. Similarly the environmental discussion over at Hay-on-Earth "Should be Leave the Oil in the Ground?" was an enlightening dalliance into the world of eco-politics. In the evening, just after the rain had started to fall (and would not stop until some time early on Monday morning) I was sent over to the music festival part of Hay, located at a different site at Hay Castle, "Sound Castle". There I was treated to an electronica/jazz fusion drumming performance by Munich-born drummer Christian Prommer that I had no right to enjoy and yet truly did.

The next day was more of the same, which was no bad thing. It started with a business talk at 9am by amongst others the CEO of Waterstones, James Daunt, "Business Breakfast: The Future of Books". I was then sent, in the persistant drizzle, to accompany some members of the RSPB as they led some children on a photography walk. Later I got to sit in on the filming of Mariella Frostrup's The Book Show for Sky Arts where she interviewed poet Lemn Sissay, critic Stephanie Merritt (aka author SJ Parris), plus singer and civil rights activist Harry Belafonte. One of the highlights of not only my day but also my time at the fesitval was the massively entertaining session I enjoyed watching Oliver Jeffers use an iPad to illustrate chapters from his life and books as he entertained a venue full of children, not long later in the same venue I was then able to see none other than Salman Rushdie with film maker Deepa Mehta talking about the upcoming film adaptation of Midnight's Children, it was then back off to Sound Castle to see Ghostpoet, a hip-hop style act kind of in the vein of The Streets and another completely unexpected pleasure.

I think that's what I loved the most about Hay, the unexpected pleasures. I went in fully expecting to see some top quality authors and commentators and be both entertained and inspired by their work and the way in which they delivered it. I got that. But it was the unexpected pleasures of working alongside some genuinely friendly and welcoming people from the guys who took us to a local pub on the first night to Tim at Sound Castle and his terrifying tale of potholing, and everyone in between. It was the food (oh God! The food!) which was amazing, it was the good nature of the punters who [largely] smiled and nodded and chatted with you as they queued in the rain or as you directed them to the other side of the site because of one of the all too frequent venue changes. It was trying to celebrity spot even though you don't know what half the famous authors look like (I'm fairly sure Ian McEwan walked past me at least twice, and I'm 100% sure I showed A. C. Grayling to his seat, and that I nearly knocked over former Welsh First Minister Rhodri Morgan in the gift shop as he was announcing to his wife that he needed a wee).

I had an absolutely amazing time at Hay, not event tainted by the atrocious journey back to Liverpool - complicated not just by a Bank Holiday but by a train breaking down further down the track in Abergavenny. I would heartily recommend that anyone with a love of people and books attend it at any opportunity they can, I know I certainly intend to book off a week of holiday next year and head South again to work as a steward, this time under my own steam. My only regret would be that I had to leave when I did, and not just because I missed personal idols like Stephen Fry and Terry Pratchett (although - no lies: that's a big part of it) but also because I felt so amazingly invigorated by environment and am already itching to go back. 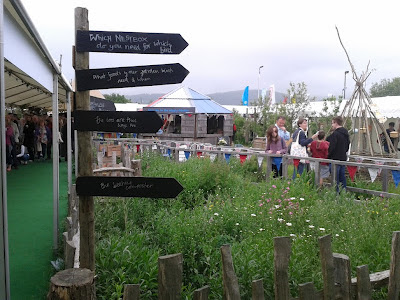