Working at Waterstones funds my Ph.D, it also distracts from working on the actual thesis more than a 20(ish) hour a week part-time job should. That said, I can't complain too strongly as working there has given me plenty of opportunities to launch initiatives and schemes of my own devising, as well as have fantastic opportunities to meet and communicate with authors and publishers who I admire.

The latest distraction I've provided myself with is a new series of readings and talks entitled "Lunchtime Classics". The intention with Lunchtime Classics was to get a few people from the Universities in to talk about certain texts or authors that they were particularly passionate about and to pitch it for the general public, I e-mailed around the different Universities in Liverpool sounding out interest expecting replies to mostly come from postgraduate students with a handful of established lecturers as a bonus. I thought I could run the talks monthly, bi-weekly at best, and keep them going until the Summer when I could review their success.

What I got astounded me. I tend to be pretty optimistic about how these things are going to turn out, after all they're my idea and if I don't have faith in them who will? But nevertheless I couldn't have dreamed I'd get such a positive response. Sure, John Moore's University ignored me entirely (name and shame!), but the University of Liverpool and Edge Hill University have come forward with a whole raft of prominent names, Liverpool Hope University have also made encouraging noises and made contact. I suppose the real surprise was when The Reader Organisation got in touch, since I'd overlooked contacting them myself, to tell me they'd heard about the plans and wanted to be involved if possible. And so after batting e-mails backwards and forwards for a week or two I managed to pull together a programme of readings that will be weekly and run until at least the end of August!

Below is a poster which shows off the first few weeks of the schedule, a more complete programme will follow once I iron out a few more details with people further down the line, as you can see the roster already looks pretty strong.

I decided to take the first session myself not for egotistical reasons, but because I expect it to be the quietest and least attended of the events and would hate for someone else to go through that and be disheartened by the scheme's prospects. It is for a similar reason that the early part of the roster is a little heavy with researchers that I know personally, again allowing me to cushion the blow should the whole thing take a while to get off the ground.

Most of the events occur on a weekday between 12 and 1pm. The exceptions to this rule, and indeed the reason why the talks aren't on the same day each week, are because of the availability of the speakers. Whilst the time allocated is an hour the actual process should take approximately 40 minutes with half that time being spent on a micro-lecture providing biography of the author, historical context, emphasising the literary importance of the piece, etc... and the other half of the time being spent reading from the original material. Because the events will be shorter than the time slot the hope is that we can start late and finish early, allowing people to fit the whole thing into their lunch breaks (assuming they take their break between 12 and 1...). The events will be held in the Illy café in Waterstones Liverpool One, and the manager of the café has agreed to give a generous 10% discount to everyone who attends.

I hope you can attend some of these readings and if you have any questions about them, or would like to be involved somehow, then please get in touch. Also feel free to repost the poster wherever you like - all publicity for the readings is appreciated. 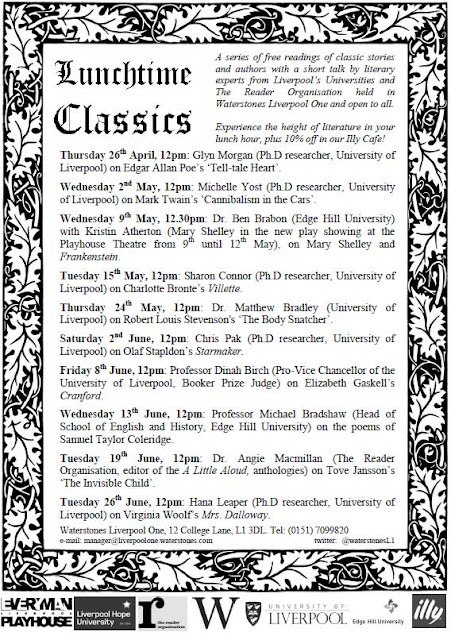