Last year I went to my first Hay Literature Festival, I was stewarding the event for three days and had a great time. There was never any doubt in my mind that, if it was at all possible, I would be back for 2013.

And back I went, for [effectively] six days this time. I did my best to tweet as I went through the festival, but stewarding duties and phone battery drainage frequently conspired to keep my phone out of use. Nonetheless, for the interested, an archive of my Hay twitter experience can be found here: http://storify.com/GR_Morgan/hay-diary-2013.

Day 1, Thursday:
Arrived later than planned, having been late leaving Liverpool but also getting stuck behind [seemingly] every tractor, lorry, caravan and overly cautious driver (30 on a straight, good visibility national speed limit road!) between Chester and Welshpool. The sky was threatening rain but held off on the most part, although a brisk wind made putting up my tent all the more difficult. Eventually arrived at the festival site to find that everything had moved around since last year. I have a pretty good memory for maps and places so this completely messed up my orientation, but everyone was in the same boat and a few walks around the site got everything straightened up in my head.

One of the best things about stewarding Hay is eating in the staff canteen tent. A local pub provides the meals and they're always tasty with an unlimited supply of sides, plus drinks. Since I hadn't actually done any work I wasn't expecting to get fed on day one but I was fortunate enough to be given a meal voucher anyway. The whole time I was at the festival I didn't pay for any food (other than an ice cream, but it was worth it), and three large hot meals a day really takes the sting out of the long hours and having to camp.

I was then sent along to the Barclays Pavillion tent, a 1000+ venue to stand by a fire escape and watch Noah and the Whale and their support act Thumpers. Underwhelmed by NotW (!), they were quite stiff and not very exciting. They picked up a bit towards the end, although perhaps that was just because they were playing the older hits which I was familiar with. The crowd seems to agree as they were much more subdued than any of the other gigs I went to over the course of the festival despite being the only sellout event I attended in the Barclays tent. If anything there was a real danger the support act had the better performance.

Day 2, Friday:
On site by 9am and the cycle of (at least) 13 hours working days begins. After a full English breakfast I was assigned to the Google Big Tent (capacity c.600) where I would stay for the duration of my time. The people you meet are another great thing about working at Hay and this year proved no exception. Whilst I would meet and chat to many people over the course of my time there (although not in the canteen - I'm terrible at canteens. Head down, eat fast, get out), the team at Google really took me in and were exceptionally friendly and welcoming. Thanks guys!

The Google tent is the third largest of the venues which means we didn't get the biggest of names but nor did we get smaller more cultish figures. Most of the speakers our tent would attract would be academics, journalists, historians, politicians, and the like, with a healthy spread of children's authors.

It was another nearly wet, windy day, and the morning was taken up with Hay Fever events (the Children's festival embedded within Hay festival proper). Seeing Liverpool stalwart Jon Mayhew give a talk to 300 or so kids about Jules Verne, Captain Nemo and his new book was particularly lovely. After that we fell into a more familiar rhythm with some fascinating talks. I'm not going to list everything I saw, if only because my memories of specifics are likely to be hazy, but some highlights included two sessions with Cambridge University professors: the first a great talk by Jonathan Haslam about the history of Russia's Secret Services from the Revolution to the (almost) modern day, and the second a talk on Nanotechnology by Mark Welland who did a great job of explaining and illustrating the complexities of the Nano world as well as its applications.

The Google tent was also right next to the bookshop so I would often catch glimpses of big names I hadn't been able to see as they made their way to their signings, as well as have lovely chats with the bookshop staff (comrades in arms).

Days 3-6, Saturday - Tuesday:
Saturday and Sunday we were blessed with glorious sunshine, which contributed to Saturday being the busiest day Hay has ever had. I'm not a hundred percent sure but I think I heard someone say that at peak there were over 10,000 people on site. Looking around at how busy it was even during the slots when most people should have been inside tents at events I could believe that estimate. Hell, there were enough people in the queue to get books signed by Children's Laureate Julia Donaldson to ensure a pretty considerable minimal attendance.

The weather wouldn't hold out though and both Monday and Tuesday it not only rained but as bitterly cold. This does bring the mood down a little and you do get the occasional punter snap at you after you inform them their event has been moved to a different tent (a regular occurrence that most festival goers take in their stride) but generally the public are a friendly and understanding bunch and even some pretty poor environmental conditions don't stop them bantering to you whilst they queue up to enter the venues.

I saw some great events over these days. Jon Ronson was particularly entertaining and Marcus Brigstocke's "Brig Society" gig was a brilliant way to spend an evening. Some of the kids events surprised me, I knew Derek Landy would be an entertaining hour having seen him do a signing at Liverpool, but was pleasantly surprised to find the Beast Quest / Adam Blade (in character as wizard Aduro) event quite amusing, although as Adam Blade is a shared pen name I don't know which author gets to dress up and sign books, or whether the publishers hire an actor, but it was fun nonetheless.

You get the same kind of surprises from adult events too. I had an idea I'd find the debate on "The Future of News" with representatives from Google, the BBC and The Telegraph interesting, but I would have expected a talk about China's economy to be quite dry and jargon based. Instead Linda Yueh gave an entertaining and informative explanation about how China's economy has grown, what this means and what might happen next. She used plenty of jargon but she broke it all down in a clear and easily understood way, showing why she's the BBC Chief Business Correspondent. Similarly, I wouldn't have expected to enjoy Sherard Cowper-Coles talking to Nik Gowing about his time in the Foreign Office but some of the anecdotes he shared about characters like Tony Blair and Robin Cook were both insightful and hilarious. Being in an event you wouldn't have chosen to attend and actually finding it really informative and enjoyable is something I particularly enjoy about stewarding Hay, and that sentiment is common to most stewards I spoke to.

Another thing stewards get their kicks from, other than just attending these events for free, is spotting celebrities in the audience. Given the kinds of events at the Google tent it wasn't uncommon or surprising to see people to vaguely recognise from newspaper editorials and such, as well as the likes of Nick Robinson and George Alagiah sitting in the crowd. But then that's Hay all over, you can be walking back from the loo on a quiet evening to realise the person walking alongside you is Dr. Rowan Williams (he of the crazy eyebrows and former Archbishop of Canterbury), or be standing around trying to organise people into an orderly queue and be asked for directions by Lee Mack, almost knock over Jack Straw, and have a quick word with Carl Bernstein.

Best feel good sensation of the festival has to go to Amadou & Mariam. A blind couple, and their brilliant band, from Mali who had the Wales tent jiving away on Tuesday night. It really warmed my heard to see young kids dancing with their parents, and old people (and I mean really old people) standing up and boogying along.

Day 7, Wednesday:
I cut my final day a little short in order to head home in good time, and to meet up with my cousin in Hay-on-Wye for an hour, but I was sorry to leave. Despite having been dog tired since day two, I have so much fun at Hay there is no doubt in my mind I'll be trying to head back next year. If I hadn't needed to be back in Liverpool it would have been extremely hard to tear myself away (I missed Jeremy Irons reading Four Quartets!).

When I got back I worked out how much I'd spent on the trip (£30 petrol + £55 camping and parking) - not including the few signed books I bought, versus how much I'd saved if I'd had to pay to see all the events I saw (although without the hindsight I now have, I wouldn't have paid to see all of them, including many which I actually turned out to enjoy) and it turns out I made a net saving of at least £144 and that's not taking into account food and drink (all those free meals vs. the occasional pint in the evening and that gorgeous peanut butter and chocolate ice cream). So, if you've always wanted to go to a festival like Hay, but are intimidated by the price it seems pretty clear that stewarding is the way to go.

But its not just about the money or the events (or, indeed, the food), it's about being part of something big, something special. Something which is genuinely inspirational and which always sends me home wanting to read more, write more, think harder and be better than I am. I'll be there come 2014, will you? 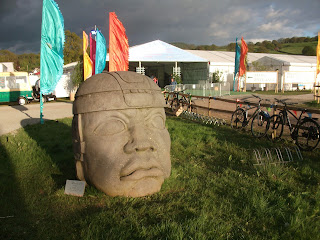