If Hitler Comes: A Cautionary Tale by Douglas Brown and Christopher Serpell 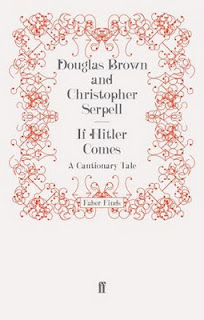 I've just finished reading If Hitler Comes: A Cautionary Tale by Douglas Brown and Christopher Serpell. It was a surprisingly enjoyable read. I knew little of the book in advance, except that it was originally published in 1940 under the title Loss of Eden, and republished in 1941 with the more direct title If Hitler Comes.

As the subtitle suggests, the novel is a cautionary tale, intended to bolster moral in the UK and encourage people to back the war to its conclusion rather than enter into some sort of Faustian pact with the Nazis. It's not an alternate history in the strict sense (it was, after all, written whilst the war was still ongoing and these events - or something similar - could actually have come to pass), and falls beyond the definition I've set for texts to be entered into my thesis. Nonetheless, it is a novel which forms part of a very interesting body of literature in the pre- and intra-war period which predict events in the future. Of course the propagandistic element of these books cannot be ignored, but that is not to say they are without value to the modern reader. If Hitler Comes for example contains many of the hallmarks that will crop up again and again in alternate history fiction which sees Britain appease or call a ceasefire with Nazi Germany rather than fight it (novels such as Jo Walton's Small Change trilogy, or the recent The Afrika Reich by Guy Saville, for example).

The novel is framed by the spectacle of some distant future archaeologist finding an incomplete manuscript which details the gloomy past of the 1940s in Britain. The rest of the novel forms this manuscript and is the account of a New Zealand press correspondent based in London as he watches the British Government sign a ceasefire, and later a mutual cooperation pact, with Nazi Germany following the capitulation of France. What follows is a nightmarish vision of ever increasing Nazi influence in Britain and the complete deconstruction of everything the nation at that time held to be dear (even the supply of tea and tobacco dries up!).

What could have been a dry and difficult text is in fact very readable and falls close enough to the realms of perceived possibility to be engaging and thought provoking. All in all a worth while discovery and I tip my hat to Faber for reprinting this book which had long been out of print until 2010.
Posted by Glyn at 13:53