Wednesday 29 June 2011, The British Library Conference Centre.
This lecture was part of the programme of events surrounding the British Library's Out of this World: Science Fiction But Not As You Know It, a superb exhibit which I'll blog about separately soon. If I could I'd attend every one of the events that were organised, they all looked brilliant, but when I saw that Niall Ferguson was giving a talk on counterfactuals I knew I just had to be there.

Some context perhaps. Niall Ferguson is Laurence A. Tisch Professor of History at Harvard, but is probably best known for his work on several Channel 4 documentaries such as The Ascent of Money and the recent Civilization: Is the West History? Now in all honesty, I've never caught one of these shows, the reason I wanted to attend the lecture was his 1997 book Virtual History. 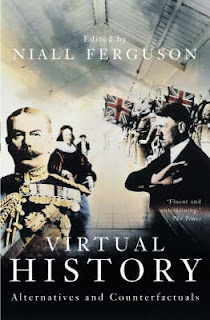 Virtual History is a collection of essays by historians imagining counterfactual scenarios, essentially engaging with "what might have been" rather than "what was". Given my study of alternate history fiction these "non-fiction" accounts are immensely interesting and the manner of their executions, their reception, and their relationship with the historical narrative are all of massive relevance to my thesis. Given the seeming rarity of academic discussion into alternate history in the UK (by which I mean conferences and lectures) I couldn't very well let this opportunity slide by, especially since it cost me a humble £5 to attend plus my travel (which luckily I pre-booked far enough ahead to get at a bargain rate).
The talk itself was very interesting and superbly well delivered, a masterclass in expressing what were at times pretty complex ideas to an audience of laymen in an engaging manner. It was essentially a summary of the lengthy introduction that Professor Ferguson includes at the beginning of Virtual History, explaining the arguments surrounding the counterfactual examination of history, the theory behind such examinations, and the benefits of counterfactual thought. Given that the original introduction was written for a book published 14 years ago it was interesting to see which elements Professor Ferguson chose to expand upon, leave out, and alter.


I was looking out for was any reference to the fictional renderings of counterfactual history, not least because they are the versions which I am studying, but also because the comments made in the introduction to Virtual History are quite dismissive: "Of course... science fiction [is] not academically respectable" (p.3) and "one thinks, for example, of Robert Harris's recent novel Fatherland, a detective story set in an imaginary Europe twenty years after a Nazi victory. As such books go, it is well researched. But it is irredeemably fictional..." (p. 7). Professor Ferguson is focusing on the historical merits of counterfactuals, as is his want, and therefore is understandably dismissive of the historical value of alternate history fiction. To put it another way, if any other historian were to dismiss historical novels as "irredeemably fictional" we might understand that the historian is arguing that the historical novel cannot imbue a proper understanding of history upon the reader, that it is a pale representation of the past intended primarily for recreation and enjoyment and only secondly (if at all) for instruction. I understand Professor Ferguson's stance in this respect, however to make such a blanketing statement as "science fiction [is] not academically respectable" is a slap in the face to everything I am trying to achieve with my thesis, not to mention the numerous more distinguished scholars who have preceded me in the field of sf.

My ears pricked then when he referred to Philip Roth's The Plot Against America and called it "fiction of huge historical merit". I regret that I wasn't selected to give a question in the brief Q+A or I would have requested Professor Ferguson expand upon this comment: what is it about The Plot Against America that gives it "huge historical merit" despite being "irredeemably fictional", is this something unique to Roth's approach on the topic, or does this represent a softening of opinion towards fictional counterfactuals from the standpoint put into print 14 years before, if so I would be interested to learn how and why this softening has occurred (I have since e-mailed my question to Professor Ferguson's Harvard account as the answer to this question could be a massively significant factor in the way in which I think about the relationship between history and fiction).

Overall it was definitely a worthwhile trip, although as ever when I visit London and the sun is shining, I wished I could stay much longer. Even if I receive no reply to my e-mail, the lecture has given me several new leads on historical theory, as well as explained some of the fine points of Virtual History which otherwise I might easily have underestimated or misunderstood.
Posted by Glyn at 13:01